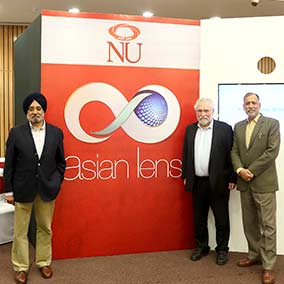 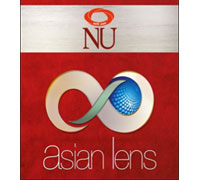 First of its kind initiative to sensitize young generation to Asian heritage, culture, history and values Established with a vision to bring about innovation in higher education and learning in emerging areas of the knowledge society, the not-for-profit NIIT University (NU) unveiled another unique initiative – The Asian Lens Forum on February 15, 2014. The Forum is an attempt to sensitize the coming Asian generations on the rich and diverse legacies of Asia with an aim to create a sense of identity, direction and vision as a beacon for the “Asian 21st Century”. By fostering a better understanding of the past, the inherent objective is to establish a robust foundation for Asia’s youth, to build an aspirational future. The Asian Lens Forum will also act as a launching pad for the faculty and student bodies of NU to undertake research and disseminate knowledge about challenges, achievements and roles of Asian societies in the globalized world. The launch event of Asian Lens was attended by eminent personalities like award-winning journalist and author Pallavi Aiyar who has written “Smoke & Mirrors” – an outstanding book on China, and just launched her recent book “Punjabi Parmesan”; Arun Maira, Member of the Planning Commission, former India Chairman of Boston Consulting Group, author of “Remaking India: One Country, One Destiny” and “Transforming Capitalism: Business Leadership to Improve the World for Everyone”; and Deepak Nayyar, former Vice-Chancellor of the University of Delhi, who has had a distinguished career in academia interspersed with short periods in the government, and author of “Catch Up”. The format of the event itself, made the session truly engaging and intense. It showcased a new-age classroom set-up wherein the key speakers were seated on a rotating stage in the middle of the hall, with three concentric circles of seating around it. This enabled eye contact between everyone in the hall, creating an opportunity to interact closely with panelists, thus stimulating a free-flowing exchange of ideas. There was also a recorded message by well known educationalist and author Prof. Rajiv Malhotra who has written extensively on civilizations & cross-cultural encounters, including his path breaking book “Being Different: An Indian Challenge to Western Universalism”. Also present were Rajendra Pawar, Founder, NIIT University; members of the NU Board including Harpal Singh, Chairman Emeritus, Fortis and Dr. Rajendra Pandey, President, NIIT University. The conversations at the event were anchored by NU Visiting Professor, Dr Jean-Pierre Lehmann, Emeritus Professor of IMD Lausanne, and an exceptional Asianist who has invested a majority of his scholarly pursuits in understanding Asia and globalization, and has written extensively on these subjects.Speaking on this significant launch, Rajendra Pawar, Founder, NIIT University said, “The rich and diverse cultural heritage of Asia and India is probably second to none. However owing to centuries of dominance by western culture and economy we seem to have forgotten our legacy. Asian Lens is an attempt to enable today’s youth to appreciate and understand their legacy and draw inspiration from it.” During the 19th and 20th centuries many of the Asian countries were colonized or otherwise subjugated by the West. The Asian mosaic of civilization was severely damaged, if not completely overwhelmed by Western imperialism. This dominance extended to every arena of economic, social and cultural life in a way that the Asian view of the world, and indeed of itself, got distorted by what one may call the Western Lens. Consequently, it would not be an overstatement to suggest that much of what Asians know of themselves is from the prism of western writers, historians and thinkers. However, since the turn of this century, one is witnessing the emergence of a new global reality: The Resurgence of Asia. Notwithstanding this significant development, there continues to be a major dependence on the Western Lens for Asians to study their individual societies or indeed for developing an understanding of a broader Asian regional context. The proliferation of “Asian Studies” centers, departments and institutes throughout North America, Australia and Europe (trained to think and research by the use of the Western Lens) will, if anything, accentuate the distorting effect and prevent “truer” contextual understanding of Asian realities. According NIIT University Visiting Professor, Dr Jean-Pierre Lehmann, “The need of the hour, therefore, is to set up comparable entities in Asia that study Asia through Asian eyes”. Mr. Harpal Singh, Board Member, NIIT University & Chairman Emeritus, Fortis further added, “NIIT University strongly feels that Asians can play their rightful role in the building of a just and successful 21st century society only if they truly appreciate the heritage that has made them what they are today.” NU realizes the need and importance of developing new and potentially superior understanding rather than creating a new body of knowledge that is parochial, self-centered and narrow. Asians and citizens from other geographies must, in the future, have the opportunity to “Know” about Asians from new and alternative lenses, as they reflect and think about what kind of future they would like to build for themselves and for the global community. Click here to download the presentation. Raji expresses his views on “The Asian lens: Creating a new vision for Asia” to Financial Express! Check it out in detail here.
We use cookies to ensure that we give you the best experience on our website. If you continue to use this site we will assume that you are happy with it.OkPrivacy policy