Our commitment towards providing an education that instils a lifelong love for learning and innovation has borne rich rewards. The numerous awards and accolades won by the founders, faculty and students of NIIT University (NU) bear witness to the success of our mission. We are proud to share some of these with you.

NU Founder and Chairman, and Co-Founder of the NIIT Group, Rajendra Singh Pawar was conferred the Lifetime Achievement Award at the Dataquest ICT Awards 2019. The award was presented during a special webinar on '40 Years of ICT Industry and the Next 10 Years' held on 18 August 2020. Mr Pawar was felicitated for his longstanding contribution in shaping the growth of the Indian information technology sector, having nurtured NIIT to become a leading Global Talent Development Corporation with a footprint in over 30 countries. Under his leadership, the not-for-profit NU has become an exemplar of his innovative model of higher education. Several industry leaders including N Chandrasekaran, Chairman, Tata Sons; Rishad Premji, Chairman, Wipro Limited; and CP Gurnani, CEO and Managing Director, Tech Mahindra, lauded Mr Pawar for his contribution to the IT sector over these last 40 years.

It’s not just our students who are toppers in their chosen fields. NU too was a topper when it won the 'University of the Year (North)' title in the higher education awards category at the Indian Education Awards 2020. Held in Bengaluru, the award was given to an institution that has ‘demonstrated exceptional performance in the past academic year’. 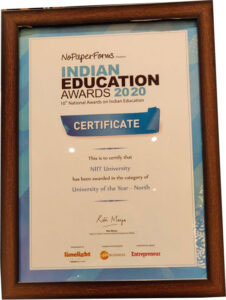 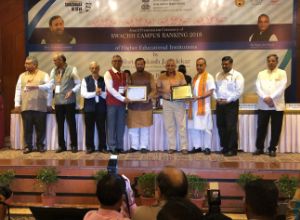 A testimony to its core principle of providing an education that is aligned to the needs of industry, NU won the 'Best Institute for Promoting Industry-Academia Interface' award at the 10th ASSOCHAM Higher Education Summit 2017. Instituted by ASSOCHAM, the National Excellence Awards are one of the most respected awards given to educational institutions with a proven record of excellence.

Our Neemrana campus was recognised as the greenest campus in the country when NU was conferred the prestigious ‘Clean, Green and Sustainability Education and Training Award 2016’ at the Clean & Green India Awards 2016. The award is an acknowledgement of the innovative initiatives taken by the university in building an intense engagement with the local community, especially through programmes that help foster an understanding of environmental issues at the grassroots level. 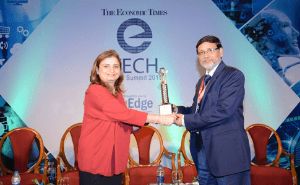 NU is of the firm belief that the country’s engineering universities can play a major role in supporting the Government of India’s path-breaking Digital India Programme, especially through myriad grassroots-level initiatives. In particular, engineering campuses need to enhance their engagement in the e-governance domain. Recognising this, The Economic Times identified and recognised those engineering campuses that are already undertaking initiatives on their own and are keen to become an integral part of e-governance, one of the key pillars of Digital India. It accorded these campuses the title of 'eGov Campus'. NU was among the few select universities to win the e-Gov Campus title at The Economic Times eTECH Summit 2015 held on 28 August in New Delhi. 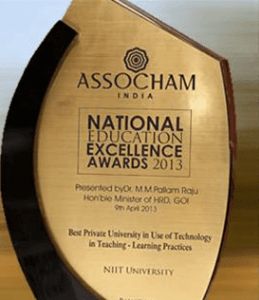 A new concept of showing content in your web page with more interactive way. Long before the COVID-19 pandemic led to the spread of digitalisation in education, NIIT University won an award for the ‘Best Private University in Use of Technology in Teaching-Learning Practices’ at the 2013 National Education Excellence Awards from leading industry body, ASSOCHAM. The award was only fitting since providing a technology-driven education is one of the four core principles adopted by NU.

NU wins yet more awards for its green campus

Over the years, NU has won numerous awards for its green and sustainable Neemrana campus. In 2012, the university was awarded the ‘Greenest and most environment-friendly campus’ at the India Today Aspire Education Summit. 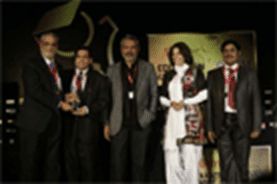 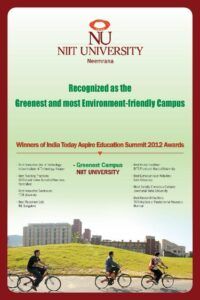 In 2017, it was recognised as the 'Eco–Corporate of the Year – Eco Campus' at the 3rd Yes Bank Natural Capital Awards. 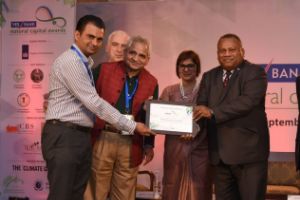 Air Commodore (Retd) Kamal Singh AVSM, Advisor, Campus Planning & Green Initiatives, at NU received the Yes Bank award in the presence of Dr Harsh Vardhan, Minister for Environment, Forest & Climate Change, at a glittering ceremony held at Hotel Shangri-La, New Delhi, on 1 September 2017. Also present on the occasion were representatives from the partner country for the awards, Netherlands, a minister from Fiji, senior officials from the Indian government, top management from leading corporates and multilateral agencies, and prominent environmentalists and academicians.