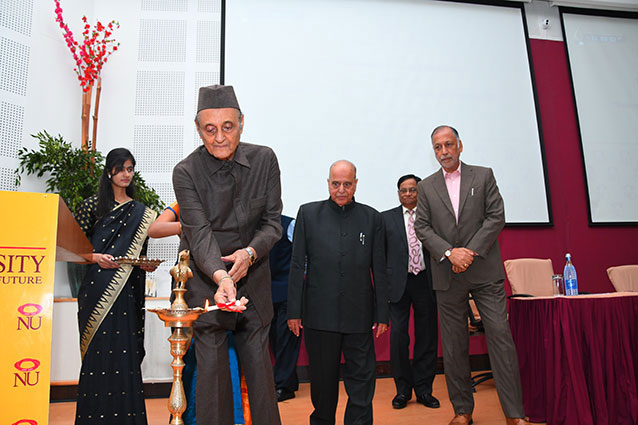 NIIT University (NU) deliberates on 'Science & Religion: Is There a Conflict ?' at the 11th Annual Lecture

Dr Karan Singh congratulated the founders and the team on the successful completion of 10 years of excellence in education. He talked about leveraging the interdependence of science and religion to help individuals realise their full potential.

During the occasion, Padma Vibhushan recipient Dr Karan Singh was conferred the title of ‘Doctor Honoris Causa’. The honour was bestowed by the incoming Chairperson of NU, Dr K Kasturirangan, Padma Vibhushan recipient, who had steered the Indian Space programme to glorious heights as Chairman of the Indian Space Research Organisation (ISRO). Dr Kasturirangan chaired the MHRD Committee to draft the National Education Policy. The National Education Policy was submitted it to the Union HRD Minister in May 2019.

Rajendra S Pawar, Founder, NIIT University and Chairman, NIIT Limited said, “We are grateful to Dr Karan Singh for guiding NU in its formative years as the founding Chairperson. His view that NU gives a glimpse of what future educational institutions can be, has inspired us over these last 10 years. We are delighted to welcome prominent scientist Dr K Kasturirangan as the next Chairperson of NU. His exemplary background and diverse experience will enable us to inject a fresh perspective and further strengthen the core values of NU”.

The Eleventh Annual Lecture by Dr. Karan Singh can be viewed at https://youtu.be/cufYJPWm-CE

The question and answer session with Dr Karan Singh can be viewed at https://youtu.be/QwuLidZ7bqs

Glimpses from the Eleventh Annual Lecture