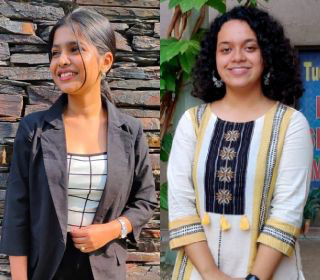 It’s no secret that students at NIIT University (NU) are distinguished by their innate passion for learning and drive to innovate and succeed. Mayuri Mane and Trisha Sharma, both fourth-year students of BTech CSE (Computer Science & Engineering) specialising in Data Science, have done NU proud at a global level with their breakthrough research and determination. Together they represented NU with their team Professional Pirates, which was awarded the first position in the AABTonics International GIS Competition organised by AABSyS IT for an ongoing project they both had been pursuing as part of their course research. Titled, ‘Crop classification using Bayesian Hyperparameter Optimised Machine Learning Techniques and Multi-temporal Sentinel-2 Data’ their competition submission had started out as an R&D project during their sixth semester at NU. Under the mentorship and guidance of Dr Thota Sivasankar, Assistant Professor, GIS, NU, this research exercise sought to build a predictive model for crop classification using Sentinel-2A data. Even after successfully completing their mandate, Mayuri and Trisha’s continued curiosity and hunger for innovation led them to explore the most suitable machine learning model, and optimise it to the best possible level of accuracy. Both Mayuri and Trisha worked closely on this project since January 2021, with clearly marked out roles. As the designated ‘implementer’, Mayuri was responsible for the analytical calculations and numerical simulations. Trisha, on the other hand, served as the ‘shaper’ for the project. Her role on the technical side involved sorting the useful and arbitrary details to come up with a big-picture perspective, for a few months. The company behind the competition, AABSyS IT, ranks as a leading provider of GIS, CAD and software services, globally. With state-of-the-art infrastructure and world-class facilities at Infocity, Bhubaneshwar and Berhampur in Odisha, AABSyS IT runs its global sales office from Noida in Delhi NCR. As part of the AABSyS IT Academia Engagement Program, the competition seeks to encourage young minds to foster an entrepreneurial spirit and receive industry recognition, by showcasing their game-changing GIS innovations. Open to students from colleges and universities across the world, the AABTonics platform allows young innovators to present their unique GIS ideas to help solve problems, and shake up the future of the GIS industry. The AABTonics programme ran across two levels. Level I required participants to submit a write-up providing vivid insights about their team’s idea/solution/innovation, while justifying their choice of GIS area and a brief introduction to the team. In Level II, qualifying teams from Level I got to work on the presentation/ video/prototype submission to be presented and demonstrated to an AABTonics selection panel. Results of the competition were declared on November 17, 2021 where the winning teams were awarded cash prizes (1st Position- Rs 50,000, 2nd Position- Rs 30,000, 3rd Position- Rs 20,000). All participants received a participation e-certificate, as a token of appreciation.