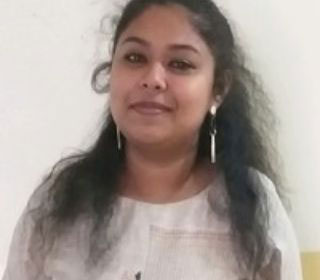 It seems rather unusual for a student of BTech in Biotechnology to opt for an internship in Market Research. But for Sumili Dey of NIIT University (NU), who underwent her Industry Practice (IP) with Growman Research Group (GRG) in Pune, this blend of two different worlds seems to have worked out well enough. “My project required me to interact with a wide range of people from across the world. I learned to communicate with people, in spite of language, cultural and personality differences. This has also allowed me to stay in touch with my field of education,” says Sumili. As a student of the NU Biotechnology programme from 2016 to 2020, Sumili acquired a thorough theoretical grounding under the guidance of highly skilled faculty members, while gaining hands-on practical experience at the university’s fully-equipped laboratory. During her R&D course module, Sumili worked on NGS data analysis as part of a team that successfully identified novel genes associated with ovarian cancer. This project received global recognition at the 7th International Conference on Research in Life-Sciences & Healthcare (ICRLSH) held at Kuala Lumpur, Malaysia in June 2019, where Sumili was adjudged as the Best Paper Presenter. This exposure to research and data analysis helped Sumili when she later interned at GRG Health. According to her, it was the project’s universal reach along with the wide spectrum of learning that made her IP stand out. While she admits she was a bit confused at the time about her choice, Sumili now believes she took the right decision thanks to her university mentor. No wonder she breezed through the interview with the GRG team which tested candidates’ general understanding of market research, and also gauged their presence of mind and English proficiency levels. “I felt confident going into the selection process and I tried to carry the same level of confidence when the internship began,” Sumili recalls. At GRG, she did find it tough initially to navigate the new field of market research. Since the company was healthcare-based, her biotechnology background came in handy. “As a Market Research Analyst, I have to extract data for client projects. Gathering information and data requires extensive knowledge about the healthcare sector. I could handle this transition through knowledge-based study, research, conducting online surveys and interviews, all thanks to my background,” Sumili says. Her stint has its fair share of challenges, though. In one project, especially, things nearly went downhill due to a wrong input from a colleague. Sumili took charge and made sure the project was successfully delivered overnight without a hitch. “Before this, I wasn’t quite sure I could deal with emergency situations of this nature. However, now I know I can step up and deal with all kinds of challenges. This experience has helped strengthen my self-confidence, and I do not undermine myself anymore,” she says. This headstrong spirit and self-belief are already taking Sumili places in her career. Thanks to her smart and proactive approach and a positive attitude, she received a pre-placement offer from the same organisation. Her renewed interest and skills in research inculcated during her NU tenure has helped her get admission at the University of Aberdeen in Scotland, where she is currently a full-time student, pursuing her Master’s degree in Biotechnology and Bioinformatics.